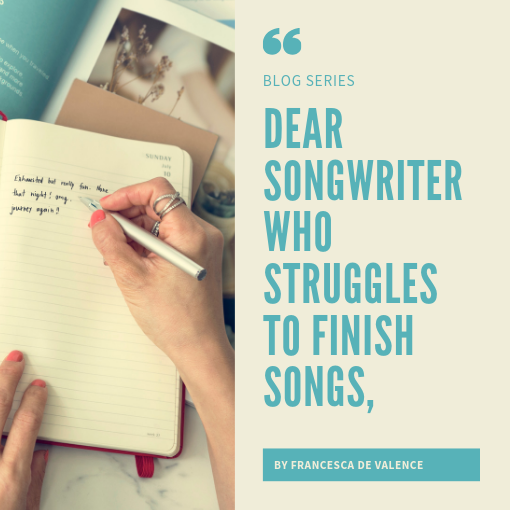 I know you’ve been writing songs for sometime now. You’ve got pages of your songwriting book filled with sketched lyrics and dozens of voice memos in your phone, but you haven’t finished a song in a while.

And if you think about how long it’s been since you’ve finished a song, you start to feel bad about yourself. But it’s okay, you tell yourself you’re just waiting for inspiration to strike, for the timing to be right.

I hear you. I understand you, because I used to be just like you. I really struggled with writing songs. And I mean struggle to the point of suffering from debilitating anxiety attacks. There was nothing more that I wanted than to play my songs, and record my songs and release my songs. But it took me months to finish writing a single song.

You know how it looks. You get this wave of inspiration, you sit at your instrument, you work that idea for 15 minutes, then you hit a wall. That voice starts up again, “that’s not good, urgh, who even writes that, how could I possibly release this song”.  So you walk away. You try again two weeks later. But it’s the same thing.

If it’s a good day, you can write a song in a short space of time and it feels so good in that moment. But those moments are rare. Very rare.

But you desperately want to be a better songwriter. You want to play your songs, and record your songs and release your songs and be living this life. But you need to finish songs to do that.

I totally get it because this is my story and that of so many other songwriters. But I have found the solution to finishing songs. And I’m going to share it with you. But I also shared it with Julie one and a half years ago. And since I shared it with Julie, she has just finished writing her 83rd song.

The words “not good enough” had plagued Julie her whole life. And now, aged 63, she has just released an album of 8 songs and is now doing something she never thought would be possible for her, not even a year ago.

This is really a very simple solution and it will transform your life if you do the work. It even works for first time songwriters. Mishell wrote her first song at the age of 38 in the middle of 2018. She has written 28 more songs since and just performed one of her songs for the first time to an audience of around 200 people.

And in case you think this solution is just for hobby songwriters, you are mistaken. As Mama Kin says, this “shook me out of my writing block and taught me new ways to write. I have it to thank for most of my songs on my latest album.” And that album was nominated for a 2018 ARIA Award (Mama Kin Spender – Golden Magnetic).

So do you want to know the solution to writing songs and finishing songs? Are you ready?

Here it is. Picture this:

“Through the act of songwriting and the supportive and encouraging community, I found myself and the encouragement to let go of self-doubt” – Laudy Music

This is bigger than writing songs. Don’t get me wrong this is about songs, but it’s more than just the songs.  It’s about who you will have become as a result of writing so many finished songs. And it’s in that becoming that you will be living the life you have always wanted. But let me tell you, this doesn’t happen overnight. This is a journey. But it can start now.